My toddler finally had a public meltdown—two in one day—and I’m still standing. I was mortified, but the bright side is, I will be less embarrassed the next time it happens because toddlers will be toddlers. This is me writing in hindsight, I wasn’t so nonchalant about this then, but I’ve accepted the fact that it will happen again. Gone are the days of my chill little infant who was fine pretty much anywhere. Sigh.

The incidents occurred when my daughter was about 21-months-old. I had to drop her off to her father’s job (his job is cool enough that I can drop her off for short periods of time plus, his job and mine are very close) so that I could go to a meeting at my gig (which wasn’t going to last longer than an hour). I usually work from home, but sometimes going to the office is unavoidable. We don’t have childcare outside of my mom, who isn’t always available (we’ve been dragging our feet about childcare, but that’s another story). This was one of those instances, which meant that I had to make the 45-minute journey on the train. I rarely travel on public transportation with my daughter, and definitely try to keep our trips no longer than 20-minutes if I have to take the train and the last time we’d taken the train, prior to this day, she spazzed out because she didn’t want to be strapped in her stroller. At that time, I took her out and allowed her to be as free as possible, but because she’s an explorer she tried to be all over the place so it was a struggle for me to keep her contained and she kept bumping into or coming close to bumping into the woman next to me. That was an experience in toddler mom life that made me decide to take more cabs with her. I don’t know why I foolishly thought us being in a car would make any difference.

So now we’re at the day in question when I had to make the pilgrimage. I decided to take a cab both ways. It takes about 45 minutes, which is the same as the train but at least it’s a more comfortable ride, so I told myself.

We were about 10-minutes away from hubby’s job, stuck in traffic when my daughter launched a screaming fit because she was tired of being strapped into her car seat. Once again, I was mortified. The cab driver, who mentioned that he had a toddler earlier, was cool about it, which I appreciated, but my kid’s seemingly endless screams prompted me to just take her out of her seat and put her on my lap. I know that isn’t safe, but like I said, we weren’t far from our destination so I did it and she remained quiet. She was fine once we got to my husband’s job though I was completely over her, and I definitely side eyed all his co-workers who praised her for how chill she was.

We took a cab home and she fell asleep for some of the ride. However, she woke up about 15 minutes away from home and started spazzing out again. It wasn’t as loud and as intense this time, but her displeasure was palpable. Once again, I was lucky enough to have a driver who seemed patient and I managed to get through it. I didn’t remove her from the car seat prematurely this time. I just sat there and endured, and so did the driver.

I walked away from this experience terrified of going anywhere with my kid but also realizing that toddler meltdowns are inevitable. There will be a next time and it is what it is. I don’t want my kid to disturb people in public but again, that’s part of toddler development and we’ll all get through. I actually feel bad now thinking back to the times I’ve been that person giving a parent shady looks for something they likely couldn’t really it and if I happen to see another mom in my position I’m going to have more empathy.

Moral of the story, all those mom’s you see on Instagram traveling with their toddlers and posted beautiful images looking blissfully happy are fraudulent. Sure, toddlers have different personalities and some may be more chill than others, and there are great moments you’ll share, ALL normal toddlers are going to meltdown. It’s who they are so don’t believe the hype and understand that you will become a victim of this one day but you are not alone and it’s totally okay if you ever feel like you need a mom break.

MAM Toothbrushes For The Battle Of Toddler Teeth 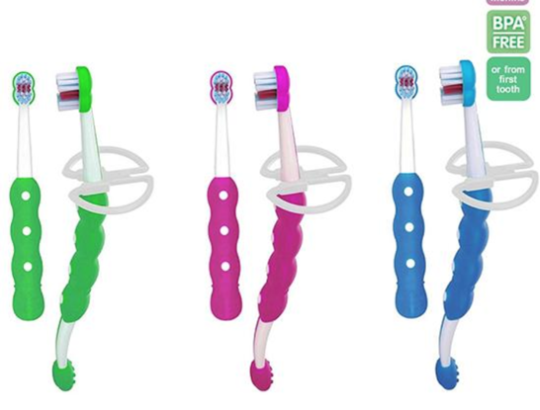 MAM Toothbrushes For The Battle Of Toddler Teeth